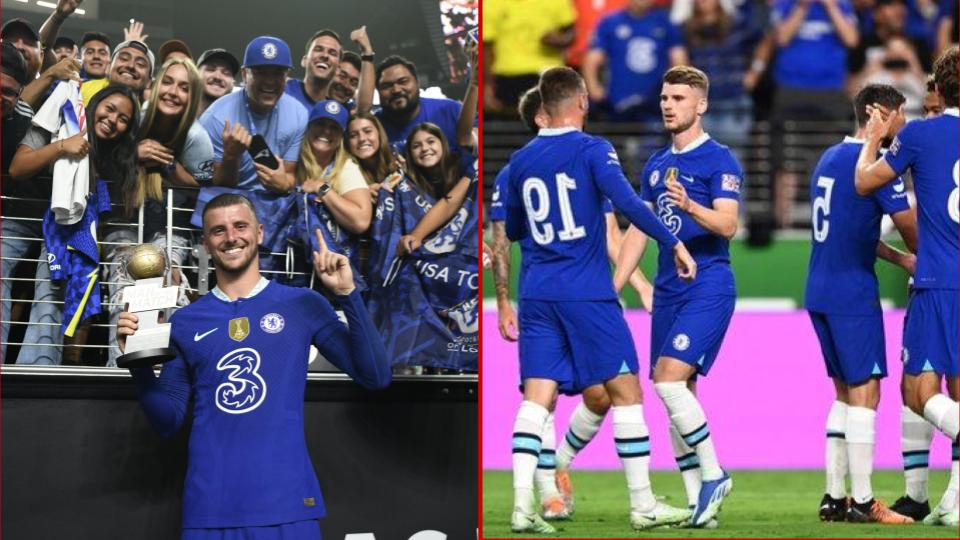 Video: Mount scores the winner as Chelsea begin pre-season with a win over Club America

Chelsea kicked off their American pre-season tour with a hard-fought 2-1 win over Club America at the Allegiant Stadium on Sunday morning.

England star Mason Mount scored the winner after Timo Werner’s opener was cancelled out by Reece James’ own goal.

Chelsea manager Thomas Tuchel named a starting lineup that had a couple of key and fringe players.

Thiago Silva, Kai Havertz and Ben Chilwell started, while players like Hakim Ziyech, Malang Sarr and Kepa Arrizabalaga were all given a chance to impress.

Chelsea started on the attack as expected, with the first chance of the game falling to Hakim Ziyech following a brilliant ball from Conor Gallagher.

However, the Moroccan international’s effort was cleared by Club American. Gallagher, who was on loan at Crystal Palace last season, showed his quality again as he set up Havertz with another delightful ball. But the German international could only fire his shot over the bar.

Havertz’s chance turned out to be the last real action of the opening half as both sides went into the break without a breakthrough.

However, the story changed in the second half as Tuchel sent out a new team that included the likes of Jorginho, Werner, Marcos Alonso and Mason Mount.

The new team took the lead ten minutes into the second half, courtesy of a strike from Werner. The German striker put The Blues ahead with a close-range finish after his initial effort from a James cross had been blocked by Batshuayi.

However, Chelsea’s lead did not last long as Club America restored parity on the hour mark, courtesy of an own goal.

Both sides had chances to take the lead, with Batshuayi guilty of missing a one-on-one for Chelsea. It looked like the match was heading for a draw until Mount popped up seven minutes from time to fire in the winner.

The Blues will continue their American tour on Thursday when they take on Charlotte FC at Bank of America Stadium.

Calvin Bassey: Super Eagles defender to Ajax is a sideways move at best