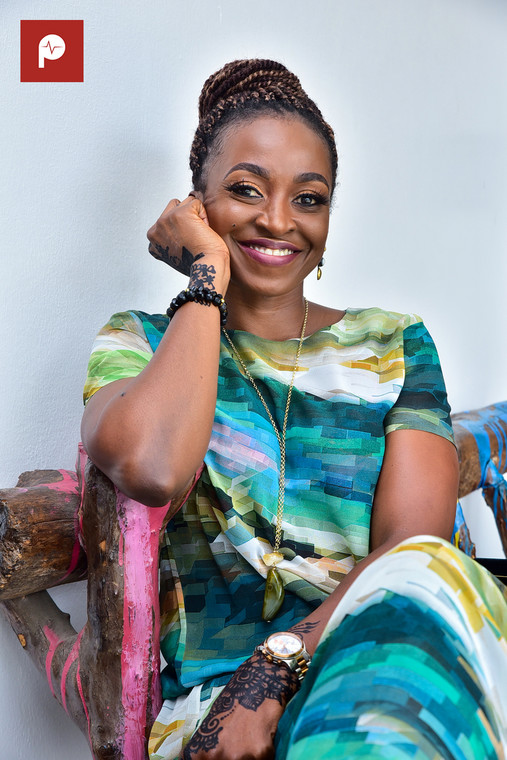 The many sides of Kate Henshaw

Kate Offiong Henshaw joined the Nigerian movie industry in the early 90s when the name ‘Nollywood’ had not yet come into existence.

And now that the Nollywood brand is beginning to stir international waters, Kate Henshaw, a true veteran, remains relevant. In 2018, she starred in the all star ensemble comedy flick ‘Chief Daddy’. The EbonyLife produced movie recently started streaming on Netflix.

This year she is the lead actress in the political movie ‘4th Republic’ that mirrors the recently gone electoral season in Nigeria. In one movie, Henshaw plays a spoiled brat scheming to get a chunk of her father’s inheritance while in the latter she acts as a strong female governorship candidate.

ALSO READ: 9 reasons actress is a veteran you should love

Kate Henshaw is more than a one-trick pony. She is a star actress, mother, politician, and fitness expert. Not too bad for a woman who initially wanted to be an air hostess.

“I love people. I love serving people, helping people, smiling and asking coffee or tea? Are you comfortable? You know I just like making people smile, making them happy, serving, you know, I just think it’s fun because I love flying too. So maybe I should try it one day I don’t know, it’s good to have me but I would love to do it,” Henshaw tells Pulse in an exclusive interview.

Kate Henshaw is a star actress, mother, politician, and fitness expert. Not too bad for a woman who initially wanted to be an air hostess. [Pulse]

In 1993, Henshaw had figured out that movie was her calling despite obtaining a certificate in Remedial Studies from the University of Calabar and later majoring in Medical Microbiology at the School of Medical Lab Science, LUTH.

Her decision to audition for a role in the Ifeanyi Anyakora directed movie, ‘When the Sun Sets,’ fetched her a major role and an opportunity to grab stardom. Since her first appearance as the lead character, Henshaw has remained relevant with over 75 Nollywood movies to his credit.

Flashing back to 26 years ago, when she got her first chance to appear in a Nollywood movie, the actress smiles with fond memories of the days of her early beginning. She says she has no regrets whatsoever in her over two decades of being in the spotlight. 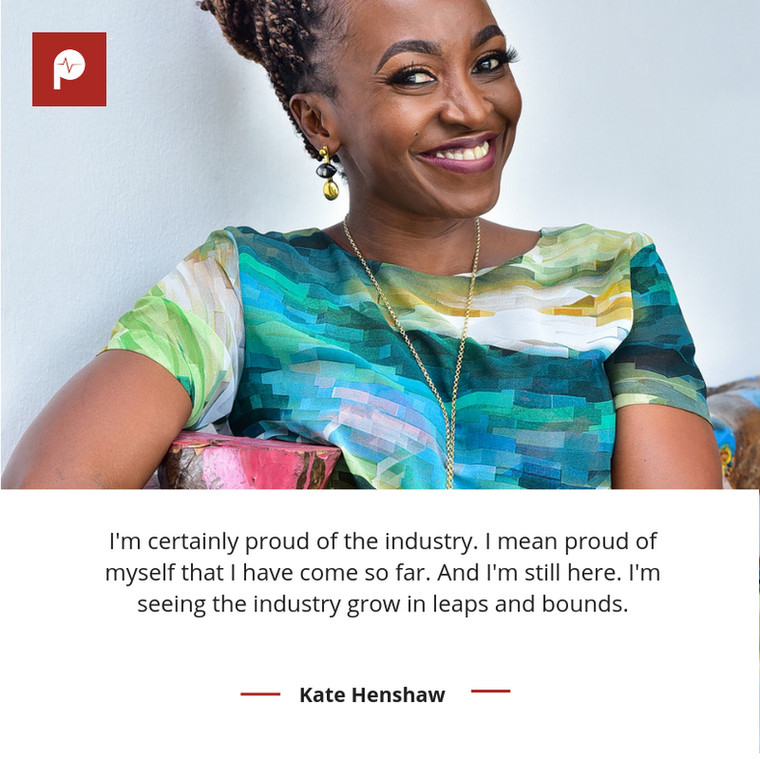 Kate Henshaw says she’s proud of the Nigerian movie industry after 26 years in the industry. [Pulse]

“Wow, that’s somebody’s whole lifetime into adulthood. Not in this industry. I’m certainly proud of the industry. I mean, proud of myself that I have come so far. And I’m still here. I’m seeing the industry grow in leaps and bounds,” she says.

Also commenting on the use of social media by upcoming actors, she said no one thought of the evolution being witnessed in the industry when she started 26 years ago.

“But now I mean, look at it. People are trying to do so much on their social media pages. They’re trying to bring up themselves as a brand and position themselves to be seen as a character in a movie, people are, you know, trying to engage them.

“Some people have been picked from their Instagram pages just because they played a particular role. People are getting very innovative. “

This award winning actress says that the quality of the script and co-actors determine what movie roles she signs up for.

“Yes (the script) is very important. Absolutely because it’s not about money all the time, because you’re going to receive N10 million and you have a bad job out there. 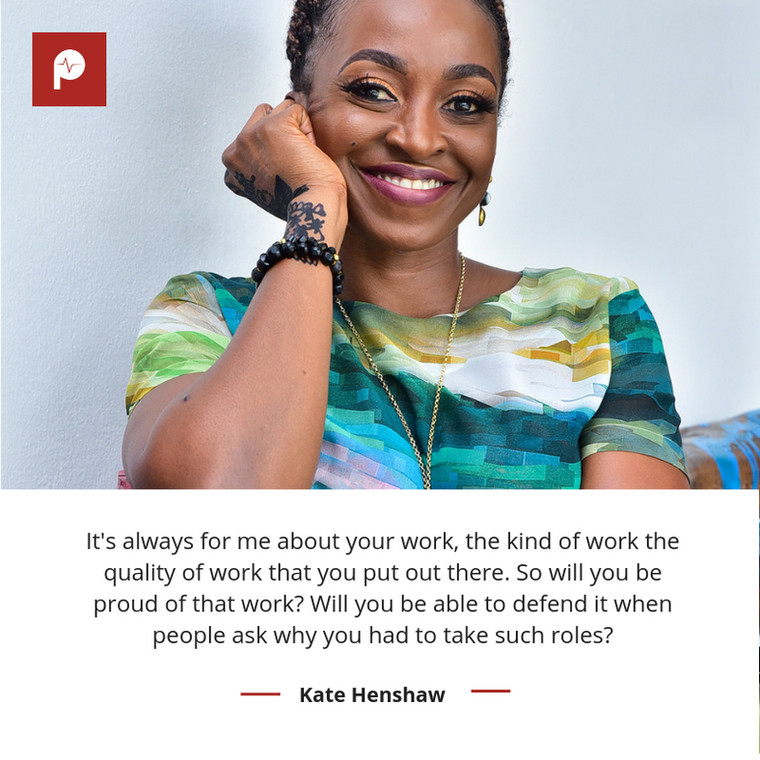 Kate Henshaw says a movie script determines her decision to take a movie role irrespective of the fee. [Pulse]

“It’s always for me about your work, the kind of work the quality of work that you put out there. So will you be proud of that work? Will you be able to defend it where people ask why you had to take such roles? Why did you take on this role?

“I’ve come to that point where even as much as money is important and I have bills to pay, the storyline is very important to me. If I read the script and the director refuses to take my input or the producer I’m like, ‘okay, I’m sorry, I don’t I’m not sure this role fits me’. It’s very important.

“I also need to know the people I’m working with, the cast and the crew. There must be some kind of chemistry, so that also translates to when people are watching the movie I don’t want issues on sets. I didn’t want to work with anybody that has an attitude, I want an easy life. So, it’s very important,” Henshaw stresses.

In 2016, Henshaw became a member of ‘fit fam’ as they say. Her dedication to sweating it out at the gym almost daily has turned her into a true celebrity fitness expert.

“I had a DVD of my routine, and I had a fitness event three years ago. It’s been fantastic. It’s sort of reinvigorated me…To me, I don’t even feel my age, you know, and I get that compliment all the time. I just take it with all that it comes. I tried to not let things get me down, and I believe it’s that place, I am as choosing fitness as a lifestyle. 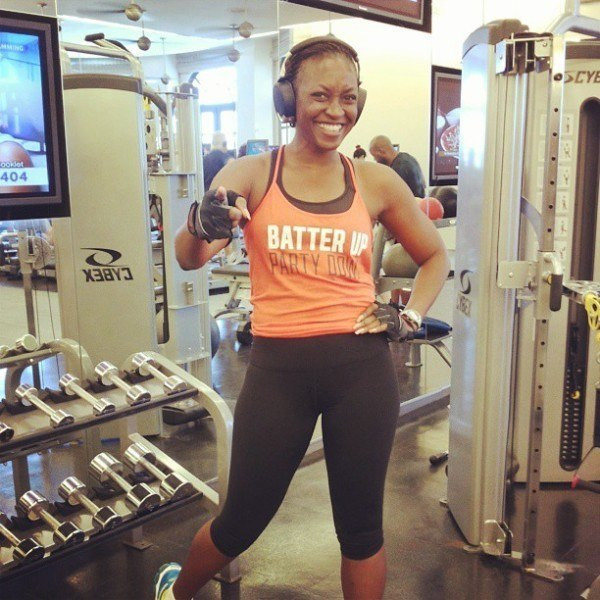 Kate Henshaw’s dedication to sweating it out at the gym almost daily has turned her into a true celebrity fitness expert. [Instagram/K8henshaw]

“And I just want to encourage everyone. That’s why I put up all those things that it’s not about age, but the later you leave it, the harder it will be, especially for women.

“That’s why I try to encourage a lot of women because women have children women have stress, women have home issues, they have work life, all of that which I believe that fitness will take care of because it puts your mind in that place where you believe that you can do anything. (It) releases happy hormones, your heart is pumping. Your skin is glowing. I mean it’s the cheapest thing out there, it’s free.”

Kate Henshaw has plans to further capitalize on her image as a celebrity fitness expert.

“I mean you have to explore every avenue, every platform so I’m thinking of doing something more with fitness may be, not a DVD, but something to do with online so that people can follow my workout routine and also translate what was in the DVD to something that people can always go back (to)” she tells Pulse.

“I mean online is the way now so have something that people will ask you questions you answer because I believe that is an ongoing thing fitness is not about the three month body or the six month bodies, it’s the forever body.

With a well-trimmed body that passes for a 35 -year-old, the ‘A Million Tears’ actress says it’s all God’s doing. She also reiterates the essence of fitness in achieving her body shape in the last four years.

“Please, I’m blushing. Well, that has to do with fitness and really really. When you are fit, I mean people, I’ve met a lot of people that ask, are you sure yeah 40-something, I don’t think so, you are lying, I mean which woman lies about her age, they reduce it not increase it. So for me I’m just, I’m just happy. I don’t have to buy new clothes that is it. I wear the same clothes I have been wearing for the past five, six years. It’s cost-effectiveness, very important.”

As an established actress with so much interest in the welfare of people and community, Kate Henshaw took her chance to get into the murky waters of politics five years ago. Henshaw contested for the ticket of the Peoples Democratic Party (PDP) to represent Calabar Municipal/Odukpani Federal Constituency at the Federal House of Representatives. 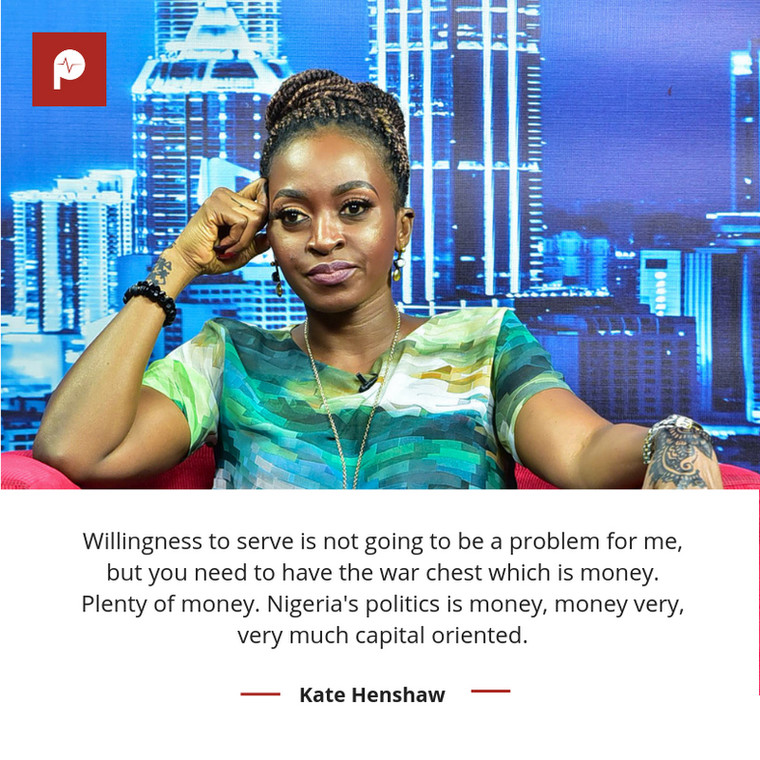 Kate Henshaw is willing to serve the people of her constituency but lacks the financial backing to fund the dream. [Pulse]

“Willingness to serve is not going to be a problem for me but you need to have the war chest which is money. Plenty of money. Nigeria’s politics is money, money very, very much capital oriented.

“I don’t have that kind of money to throw away. I’m saying throw away because sometimes if you spend that money, you’re not guaranteed of a win because it’s a vicious cycle. The people keep expecting money, you give them money, they vote for you, when you vote with people they go to the reps or whoever the senators and they go away for four years.

“They come back and throw money at you, you receive it, even though in this last political dispensation there are a few surprises, which is very good and I think that people are their eyes are getting you to know open and they’re getting wise to the political antics,” she said candidly.

Henshaw has her sights on establishing herself behind the camera. She looks forward to taking up a role as a production manager when (and if) she decides to stop acting.

Despite her role as a good organizer, it is hard to imagine Kate Henshaw not appearing in movies. Seasons might change and stars might fade but one thing has been constant for over the last two decades, Kate Henshaw’s smile on our screens.