Tax experts have called on the Nigerian authorities to widen the country’s tax collections across the country.

They made this known at the 2019 tax conference of the Chartered Institute of Taxation of Nigeria (CITN), according to a report by Guardian Nigeria.

According to the report, Justina Okoror, the outgoing chairperson of the Society of Women in Taxation (SWIT), explained that 70% of the tax revenue generated by the country in 2018 was contributed by Lagos alone.

Okoror urged the government to pay attention to other interior parts in order to broaden the nation’s tax base and increase the number of people in the tax pool.

“It is worrisome that 35 states and the FCT contributed a paltry 30 per cent of the total,” the news platform quoted her.

Kudirat Abdulhamid, another tax expert and the new National Chairperson of SWIT, also queried the nation’s debt at an alarming rate when other potentials are not utilised.

“I agree with people complaining over government borrowing, but if citizens pay taxes and it is judiciously utilised for the provision of this service, people will be eager to pay more. But when the government borrows money without providing infrastructures, citizens would become angry,” she said.

In 2018, the Federal Inland Revenue Service, FIRS, broke the country’s tax collection history with a total collection of N5.32 trillion. 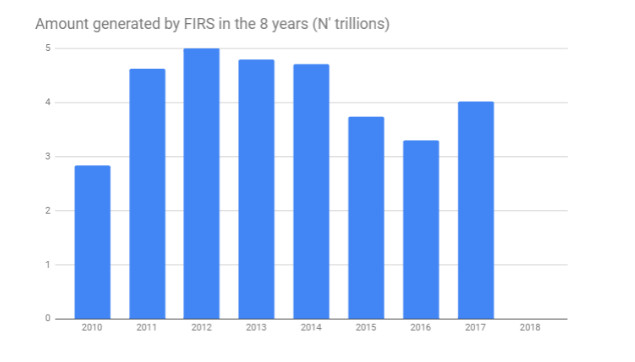 Revenue generation trends of FIRS in the last 8 years

The FIRS Chairman said the agency is targeting N8 trillion for 2019.

Nigeria is facing a huge fiscal challenge to meet up with infrastructural decay and rising debt level. To reduce its debt burden, the IMF has also advised it to increase its revenue sources.