Also playing in his first game for the Super Eagles since the 2018 FIFA World Cup, Super Eagles captain John Obi was given the Man of the Match award.

Still searching for solutions, Gernot Rohr went with Daniel Akpeyi in goal with the central defensive partnership of Kenneth Omeruo and Leon Balogun.

Torino’s Ola Aina was at right-back while Mikel, Oghenekaro Etebo and Alex Iwobi were in midfield.

The Super Eagles started with the intention of holding on possession although it was difficult to keep the ball on the water-soaked pitch as the rain poured.

Despite the conditions, the Super Eagles created a couple of chances and as early as the fifth minute, Onuachu should have scored after he was played through by Iwobi but the lanky striker could only find the side-netting with his weaker left foot with just the Zimbabwean goalkeeper to beat.

The Zimbabweans grew into the game and got their chance to take the lead in the 22nd minute through captain Knowledge Musona whose effort went over the post with only Akpeyi to beat.

Chukwueze tried lifting the crowd with some good moves and tried to beat the goalkeeper with a curler from the edge of the box but his effort was pushed away by the Zimbabwean goalkeeper. 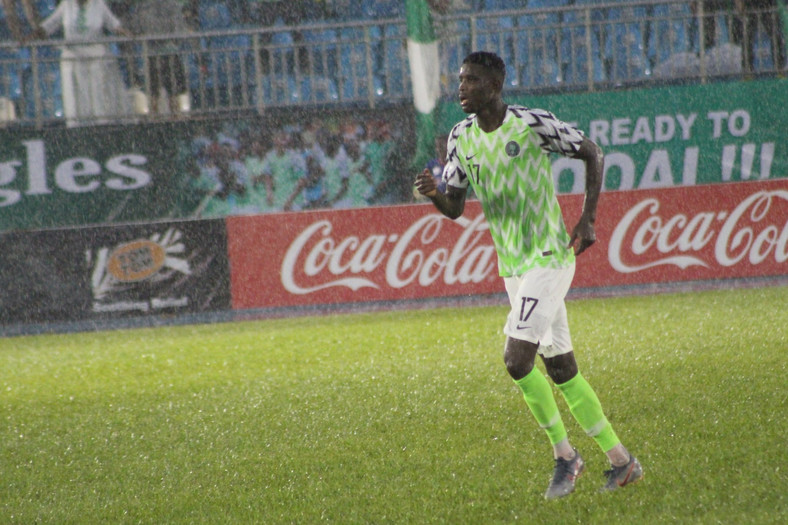 Kalu also had a chance to score but his effort from a good area inside the box went over the post.

The introduction of Ahmed Musa in the second half brought the much-needed urgency for the Super Eagles as he troubled the visitors a couple of times.

Musa’s teasing cross missed everyone in the box while Chukwueze flashed a shot across the Zimbabwean box as the Super Eagles looked for an opener.

Mikel did well by playing a through ball to Super Eagles left Jamilu Collins who failed to steer the ball past George Chigova in goal for Zimbabwe.

Henry Onyekuru came on too and created problems for the Zimbabweans from the left but yet the Super Eagles failed to get a goal as the visitors held on to get a goalless draw.