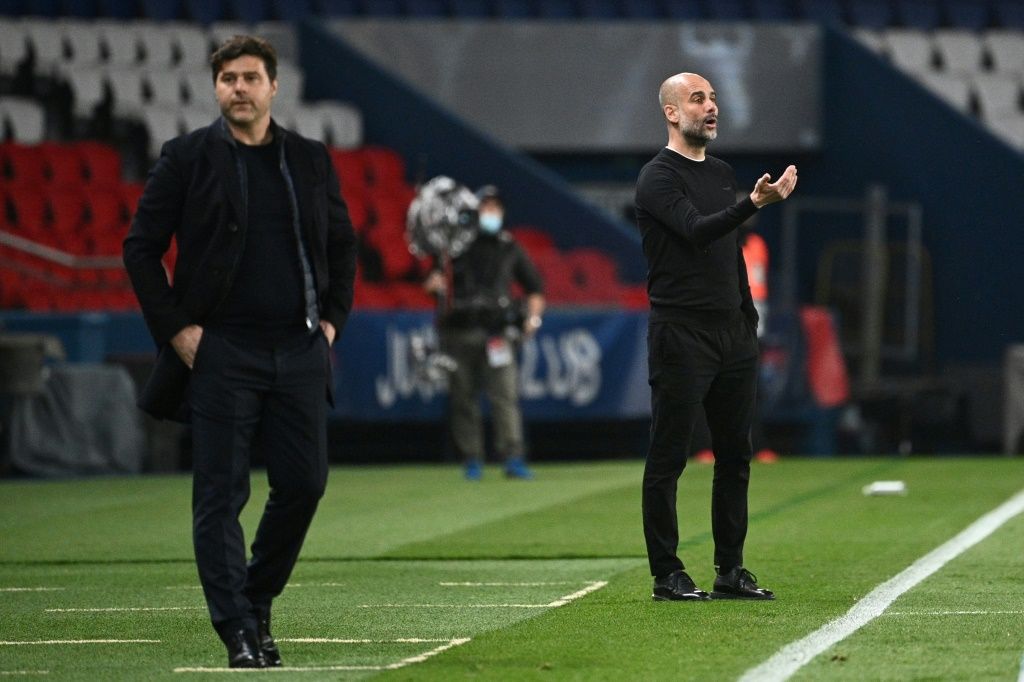 Paris Saint-Germain’s best results this season have come away from home and coach Mauricio Pochettino remains optimistic they can reach the Champions League final despite throwing away the lead to lose 2-1 at home to Manchester City in the semi-final first leg on Wednesday.

PSG held a deserved half-time lead at the Parc des Princes after Marquinhos headed them in front in the 15th minute, but City fought back after the break with Kevin De Bruyne scoring from a cross and Riyad Mahrez from a free-kick to swing the tie their way before next week’s return.

However, Pochettino has reason to be confident going to the Etihad Stadium, as PSG aim to go a step further in Europe than last year, when they lost the final to Bayern Munich under former coach Thomas Tuchel.

After all, PSG have already reached this stage of the competition on the strength of their away performances, beating Barcelona 4-1 at the Camp Nou in the last 16 and defeating Bayern 3-2 in Munich in the quarter-finals, results that enabled them to advance despite failing to beat either side in Paris.

It was a similar story in the group stage, when they lost 2-1 at home to Manchester United under Tuchel but triumphed 3-1 at Old Trafford.

“Of course it’s going to be difficult but we need to really believe we can do something there in Manchester,” a bullish Pochettino said as he looked ahead to next Tuesday’s second leg.

“They are a very good team but we need to believe, and we have the talent. Tonight was a painful night, the way we conceded the goals was painful but we need to look forward, try to be optimistic, be positive and believe we can win the game and be in the final.”

Since arriving at PSG in January, Pochettino has drawn on the devastating pace of Kylian Mbappe in particular to turn the French club into a potent counter-attacking force, in stark contrast to their often woeful home results.

It is a wonder that they remain in a position to reach the Champions League final next month in Istanbul given their results at the Parc des Princes this season.

Meanwhile they sit second in Ligue 1 with four games left, but they are just a point behind surprise leaders Lille and so could still retain their domestic crown despite losing at home to Lille, other title rivals Lyon and Monaco, as well as Marseille this season.

PSG have another home league game on Saturday, against Lens, before they can focus fully on the second leg against City.

“It is going to be different next Tuesday. We need to see what form we are in. We played well in Barcelona away from home and at Bayern Munch but of course having the belief is the most important thing,” added Pochettino.

The Argentine can also take some inspiration from what happened when he took Tottenham Hotspur to play City in the Champions League quarter-final second leg in 2019, even if the circumstances were different.

On that occasion Spurs had won 1-0 in the first leg and then lost 4-3 in a remarkable second leg to progress on away goals.

Such a result would not do for PSG next week though, and Pochettino added: “We need to go to Manchester thinking we need to win and that we need to score two goals.”

They will go into that game without midfielder Idrissa Gana Gueye after he was sent off for a nasty tackle on Ilkay Gundogan late on in Paris.

However they will hope for another big away performance from Mbappe, who scored a hat-trick in Barcelona and a brace in Munich, and also scored at the Etihad Stadium as a fresh-faced 18-year-old with Monaco in 2017.

“We need to show character,” said Marquinhos. “If we don’t believe, there is no point in us going there.”