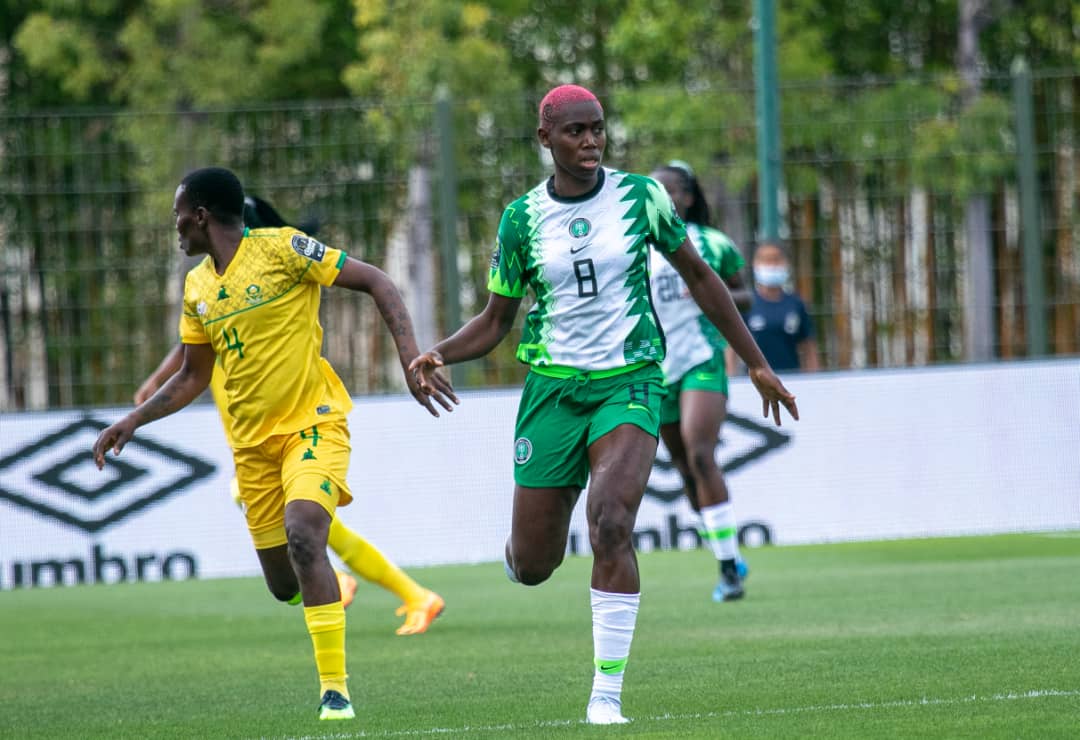 The Barcelona star was helpless as the Bayana Bayana stunned the defending champions on Monday evening.

Nigeria’s Super Falcons suffered a reality check in their opening game of the 2022 Women’s Africa Cup of Nations following a 2-1 loss to South Africa.

The Super Falcons were the defending champions and the team to beat, but they were brought down to earth by the Bayana Bayana, who earned a deserved win.

Standing in for the suspended Chiamaka Nnadozie, Oluehi could not have done anything to save the two goals she conceded.

However, she was not convincing either and was lucky not to be sent off. (5)

The American fullback was solid defensively in the first half and looked good going forward. However, she was at fault for South Africa’s second goal as she was caught out of position. (5)

The two centre-backs were a mess, failing to cope with the speed and skill of the South Africans. (4)

The captain was unaware of her surroundings for the first goal and out of position for the second. She lacked positional awareness and the speed to match the athletic South Africans.

Plumptre was Nigeria’s best defender despite playing in an unfamiliar left-back role. She was comfortable and calm with the ball. However, she was beaten too easily for the first goal. (6)

Ajibade was arguably Nigeria’s player despite playing in a midfield role. She was great with the ball and kept things tidy.

The Atletico Madrid star scored the goal that threatened hopes of a comeback, but it came too late.

Ayinde was Anonymous for most parts of the game and bypassed easily. She had no grip and failed to make an impact. (4)

Chikwelu failed to offer any creative spark in the game and rightly deserved to be taken off. (4)

The Sevilla forward played the ball into promising positions in the first half but faded off in the second. (5)

All eyes were on Oshoala, but the Barcelona Femeni star was disappointing before she went off in the second half. She had a couple of half chances in the game but could not make it count. (4)

Onumonu was also anonymous for her entire duration on the pitch. Expect her to drop to the bench for the next game. (4)