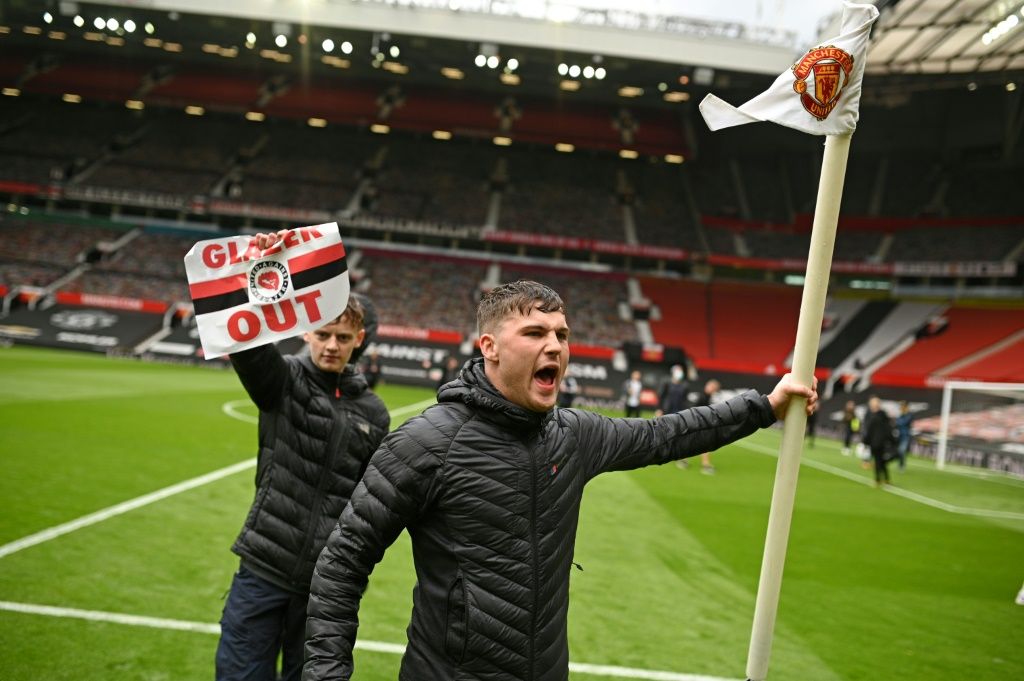 Manchester United fans stormed the Old Trafford pitch to voice their anger at the club’s American owners, the Glazer family

Kick-off in Sunday’s Premier League match between Manchester United and Liverpool was delayed after fans invaded Old Trafford as part of a protest against United’s owners, the Glazer family.

Hundreds of fans managed to make their way into the ground and onto the pitch, chanting “we want Glazers out.”

Large numbers of supporters had also gathered outside the stadium, on the day Manchester City could be crowned Premier League champions if United lose.

The match had been due to start at 1630 local time (1530GMT), but the Premier League confirmed the game has been delayed until further notice.

Anger towards the Glazers has been reignited by United’s part in a proposed European Super League (ESL) that collapsed within 48 hours last month due to a backlash from fans, players, governments and governing bodies.

United were reportedly one of the leading drivers behind the project that sought to guarantee top level European football for 15 founder members every season without the need to qualify on the pitch.

In a rare public statement, United co-chairman Joel Glazer apologised to fans for signing up to the ESL.

“You made very clear your opposition to the European Super League, and we have listened. We got it wrong, and we want to show that we can put things right,” he said.

“Although the wounds are raw and I understand that it will take time for the scars to heal, I am personally committed to rebuilding trust with our fans and learning from the message you delivered with such conviction.”

The Americans have owned United since a controversial leveraged takeover in 2005 saddled the club with hundreds of millions of pounds worth of debt.

As the English giants have paid off huge interest payments, amounting to over £800 million ($1.1 billion), in the last 16 years, the Glazers have still regularly drawn out millions in dividends from their shares.

United fans wore green and gold colours to matches early in the Glazers reign, the colours of Newton Heath, the club founded in 1878 that eventually became Manchester United 24 years later, as a sign of protest.

Green and gold scarves and flares were back at Old Trafford on Sunday, while there were a number of banners aimed at the Glazers.

United’s executive vice-chairman Ed Woodward has already announced he would be leaving his role by the end of the year amid the fallout from the failed ESL project.

Nepotism, Insecurity: We’re justified in our decision not to support Buhari ― Afenifere