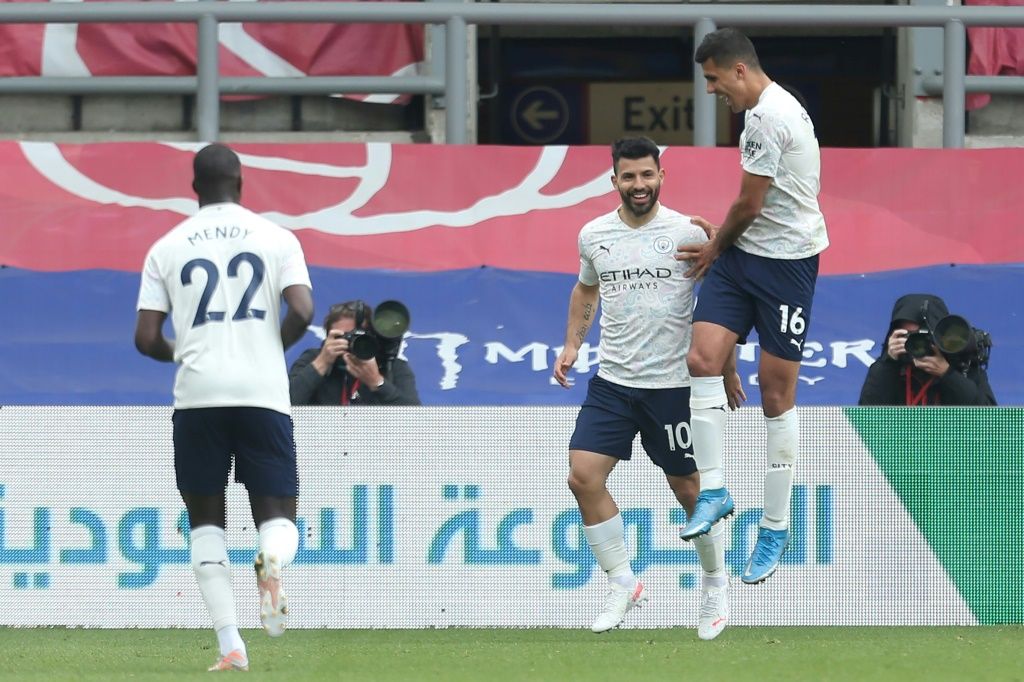 Manchester City were on the brink of clinching the Premier League title after a 2-0 win against Crystal Palace on Saturday, while Chelsea maintained their hold on fourth place after beating Fulham by the same scoreline.

Pep Guardiola’s side moved 13 points clear at the top thanks to second-half goals from Sergio Aguero and Ferran Torres at Selhurst Park.

City will be crowned English champions for the third time in four seasons if second-placed Manchester United lose at home to Liverpool on Sunday.

If United avoid defeat, City can seal the title with a victory against Chelsea at the Etihad Stadium next Saturday.

City, who surrendered the title to Liverpool last season, overcame a mediocre first half with two goals in 84 seconds.

Aguero, making only his sixth league start of an injury-plagued season, broke the deadlock in the 57th minute when he ran onto Benjamin Mendy’s long pass and slammed a half-volley into the roof of the net from 10 yards.

It was only his fourth goal of what club record scorer Aguero has announced will be his final season with City.

Spanish forward Torres gave a glimpse of his potential when he fired home from the edge of the area in the 59th minute.

They were languishing in 14th place in late November.

City have already won the League Cup this season and could also add the Champions League to their haul.

On Tuesday, City will attempt to reach their first Champions League final when they defend a 2-1 lead in the semi-final second leg against Paris Saint-Germain.

“We can start to think about it and put it in the fridge. The Premier League is already there, it is in our hands. We need one more victory,” Guardiola said.

“I’m absolutely delighted with that after the Champions League. We could not play with much rhythm. We struggled a little bit but in the second half we deserved it.

“I will check on the Liverpool game. It’s in our hands and now we will give everything to beat PSG.”

The German playmaker scored in each half at Stamford Bridge to lift Chelsea six points clear of fifth-placed West Ham in the race to qualify for next season’s Champions League via a top four finish.

West Ham, who have a game in hand, play Burnley on Monday.

Havertz, played in by Mason Mount’s impressive through ball, opened the scoring in the 10th minute and he sealed victory with a fine finish shortly after half-time.

Chelsea manager Thomas Tuchel, commenting on Havertz, told the BBC: “There are many reasons to maybe talk about why it is a difficult situation (for him in his first season in England) but in the end you are responsible for yourself and he is.”

Defeat left Fulham in the relegation zone and nine points shy of safety.

Brighton, however, all but assured themselves of Premier League survival with a 2-0 win at home to Leeds.

The south coast side broke a three-game goal drought when they took the lead through Pascal Gross’s 14th minute penalty after Ezgjan Alioski brought down Danny Welbeck.

Welbeck’s excellent solo effort in the 79th minute secured victory and left the Seagulls 10 points clear of the relegation zone.

Everton’s push for European qualification suffered a setback with a 2-1 loss at home to Aston Villa.

Ollie Watkins put the visitors ahead in the 13th minute at Goodison Park only for Everton’s Dominic Calvert-Lewin to equalise six minutes later.

But Villa’s Anwar El Ghazi settled the match 10 minutes from time with a superb curling shot from the edge of the box.

Victory saw Villa climb to ninth in the table, just a place behind Everton, now nine points adrift of the top four.

“It was not a good evening,” said Everton manager Carlo Ancelotti.

“The season is not finished yet. There are five games and we have to keep fighting.”