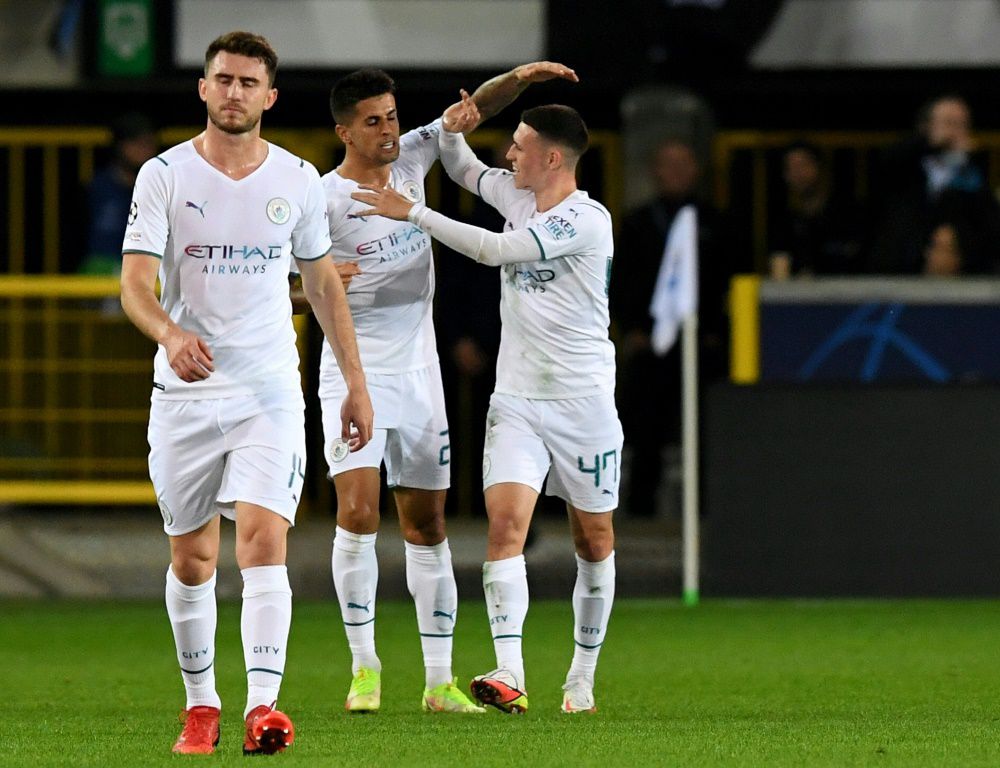 Riyad Mahrez scored twice as Manchester City delivered “one of their best” Champions League performances to thrash Club Brugge 5-1 on Tuesday and re-emphasise their status as major contenders for a first European crown.

Joao Cancelo gave City a deserved lead on the half-hour and Mahrez converted a penalty just before the break as Pep Guardiola’s side bounced back in style from last month’s loss to Paris Saint-Germain.

Kyle Walker added a third early in the second half and 19-year-old Cole Palmer bagged his first Champions League goal minutes after coming on as a substitute.

Hans Vanaken pulled a goal back to the delight of the home supporters but Mahrez capped a thumping City victory with his second of the night.

“It was one of the best performances in Europe we’ve done so far,” said Guardiola. “We are all delighted. We were so good.”

The win leaves City side with six points after three games in Group A, with the champions of England and Belgium to meet again in two weeks in Manchester.

“If we can take three more points, to have nine points with two games left, we’ll be close to qualifying for the next round,” added Guardiola.

Viewed as the weakest team in a group also featuring 2020 semi-finalists RB Leipzig, Brugge had surprisingly held PSG to a 1-1 draw in their opening game of the section at the Jan Breydelstadion.

City, facing Brugge for the first time, twice had the ball in the net inside the opening 15 minutes. Grealish’s lob was ruled out for a push on Clinton Mata, with Rodri’s tap-in disallowed for offside.

Phil Foden fired into the side-netting after running onto a long ball, the England international’s free roaming as a false nine constantly troubling Brugge.

It came as little surprise Foden created the opening goal for Cancelo, chipping a delightful ball over the defence that the Portugal defender poked through the legs of former Liverpool goalkeeper Simon Mignolet.

Stanley Nsoki chopped Mahrez down in the area late in the first half, the Algerian doubling City’s lead as he sent Mignolet the wrong way from the spot.

Mahrez nearly struck again before half-time but Mignolet beat away his first-time strike from Foden’s lay-off.

Walker all but put the match out of reach on 53 minutes when Mahrez and Kevin De Bruyne combined, the latter rolling through for Walker to drill low past Mignolet.

Mignolet denied Foden with his legs as City continued to stream forward. Not even a spate of changes could check their momentum as Palmer scored three minutes after replacing De Bruyne.

No sooner had Belgium star De Bruyne walked off to warm applause from the home supporters than Palmer curled in from Raheem Sterling’s assist.

Mignolet saved well from Sterling after he escaped in behind the defence, with Ederson producing a sharp stop to turn away Charles De Ketelaere’s diving header.

Brugge refused to fold and Hans Vanaken steered in a consolation nine minutes from time, but the game finished as it started, with City flexing their muscle as Mahrez burst clear to complete the rout.

“We were realistic before the game. We know what the difference in quality is between the two sides,” said Brugge coach Philippe Clement.

“You know you need a lot of luck today and extraordinary performances from every player to get points from one of the two best teams in the world.”