Chelsea goalkeeper Kepa Arrizabalaga stole the headlines after he defiled his manager’s order to be substituted in the dying minutes of the League Cup final on Sunday, February 24 against Manchester City.

Seemingly struggling with a cramp, Kepa had gone down injured which promoted Maurizio Sarri to summon his other goalkeeper Willy Caballero.

Kepa, however, refused to leave the pitch when the electronic board came up with his number, insisting that he was fit enough to continue.

Despite pleas and orders from the technical bench, Kepa insisted that he would continue leaving Sarri fuming with rage when the referee waved play on. 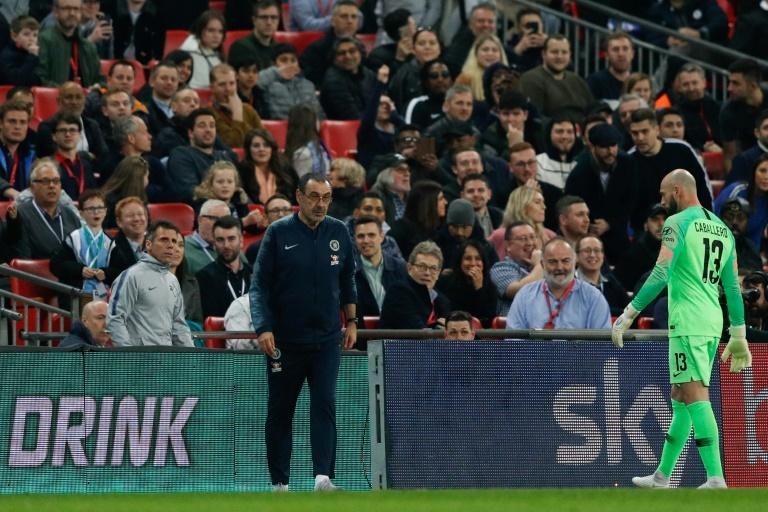 Chelsea manager Sarri was furious after Kepa refused to come out for Caballerro.

It was the drama that dominated Twitter conversations on Sunday, February 24 as Chelsea lost 4-3 on penalties to defend their League title at Wembley.

Kepa went on to save one penalty in the shoot-out but it wasn’t enough for Chelsea.

Kepa quickly became the number one trending item on Twitter Nigeria as football fans reacted to the bizarre end to the League Cup final.

Sarri played down the situation as just ‘misunderstanding’ after the game while Kepa maintained that he wasn’t trying disobeying the manager’s substitution.

In his explanation, he said he thought he was being taken off because of his injury but he insisted on remaining on the pitch because he recovered from it.

Football brought respite from the political tension on Twitter Nigeria as nine of the 10 trending items were from the League Cup final and the Premier League clash between Manchester United and Liverpool which ended in a goalless draw.

Jordyn Woods says she was drunk during hook up with Khloe Kardashian’s boyfriend, Tristan Thompson

The Key to Small Business Success is Your Professional Support Network