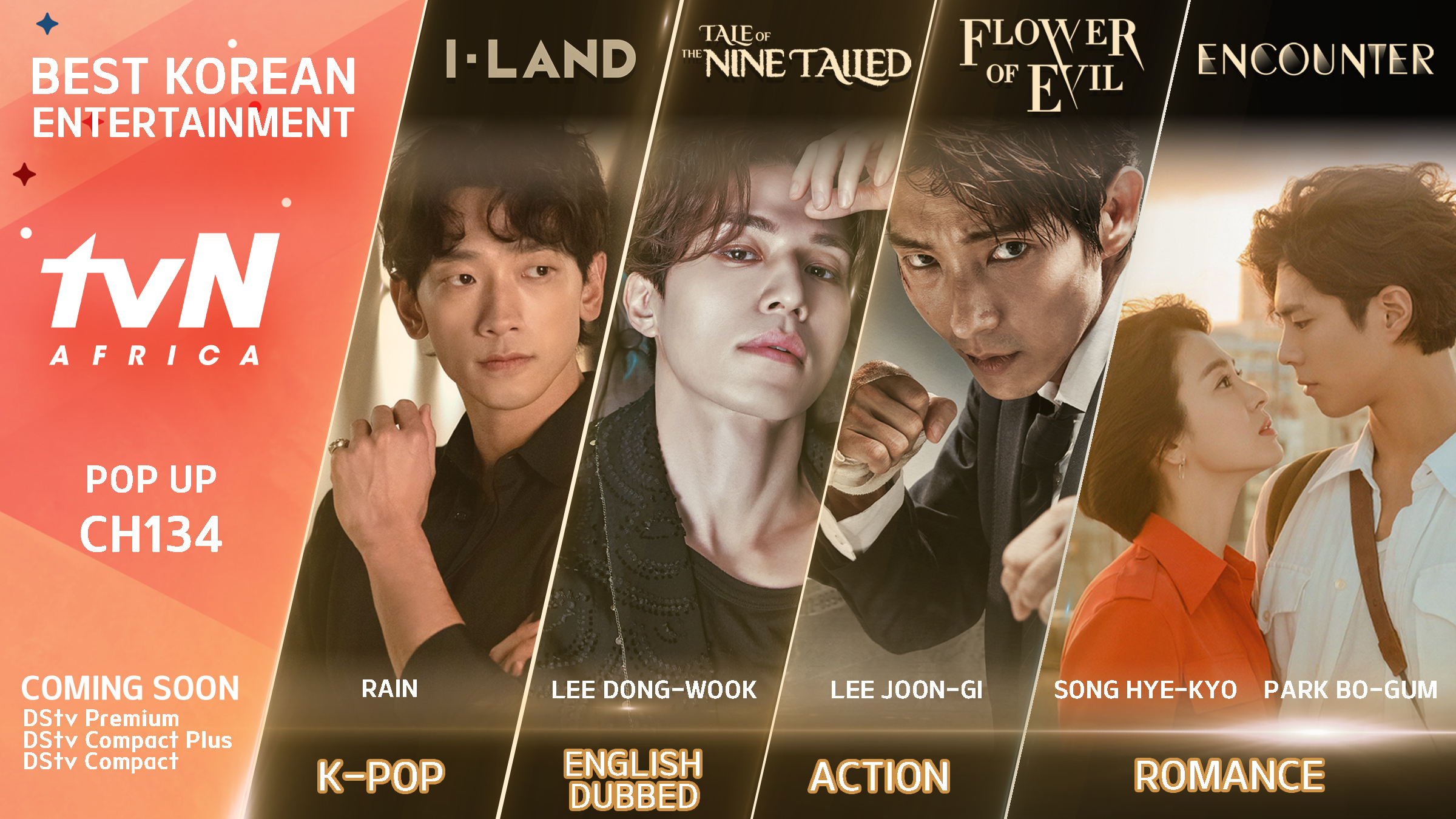 MultiChoice Group and its counterpart, CJ ENM HK, have just announced the launch of Korean entertainment pop up channel tvN Africa on DStv, channel 134 from Monday, 1st March, 2021. This marks the first foray for Korea’s #1 entertainment brand into the continent.

Starting Monday, 1st March, DStv customers will be able to experience the Best Korean Entertainment and world-famous Korean stars, specially curated and packaged in one channel. The customisation is critical to satisfy fans and attract new audiences.

Similar to tvN Asia, the channel will be presented in English and include programs with English subtitles and a dedicated drama slot dubbed in English. There will be fresh hourly programming every weekday from 5:45pm.

Here’s some of what viewers can look forward to on the new channel:

Love is in the air for all K-drama fans every Monday to Wednesday 5:45pm starting with Another Miss Oh, a romantic series about two women who not only share the same name Oh Hae-young, but they also share a destiny with the same man, Park Do-kyung, who can see the future.

On Thursday and Friday, tvN Africa offers DStv viewers K-POP Hour with an exciting slew of Korean Music Variety programs including the ultimate survival variety program I-LAND (Every Thursday, at 5:30pm), led by Bang Si-hyuk, BTS’ producer and founder of Big Hit Entertainment, hosted by actor Namkoong Min, together with Rain and Zico as producers.

The show follows the creation process of the next-generation K-pop boy group. Fans of NCT should not miss NCT World 2.0 (Every Friday, 5:45pm), the first reality series starring all 23 members of NCT (including their new additions Shotaro and Sungchan) as it showcases each member’s talents and charms, as well as the group’s perfect chemistry as they clear missions to travel through time and space.

Continue the night with Cheese In A Trap (Every Monday – Friday, 7pm), a romantic series adopted from the popular webtoon of the same name starring Park Hae-jin, Kim Go-eun, Seo Kang-joon and Nam Joo-hyuk.

Look out for Super Junior’s Choi Si-won as a son of a wealthy family who has never bothered to make any specific life goals until he meets Baek Joon (Kang So-ra) in Revolutionary Love coming up after that in March.

Every weekday night at 8:15pm, subscribers can look forward to a dedicated Korean drama slot dubbed in English starting with Encounter, an “opposite-attracts” story that follows the complicated romance between a free-spirited ordinary man (Park Bo-gum) who seems to have nothing and the wealthy CEO (Song Hye-kyo) of a hotel who seems to have everything but is unhappy with her life.

Tale of the Nine Tailed, a romance fantasy drama that tells the story of a fearless producer (Jo Bo-ah) determined to hunt down a nine-tailed fox (Lee Dong-wook) who goes after evils that disrupt the order of the human world. This will premiere in March after Encounter.

End your evening with some action. Signal (Every Monday – Friday 9:30pm), a crime thriller featuring Kim Hye-soo, Lee Je-hoon and Choi Jin-woon. The series connects a criminal profiler from present day 2015 to a detective from 1989 via a mysterious walkie talkie to tackle crime and injustice. Coming up after Signal is a gripping and highly addictive crime melodrama, Watcher starring Han Suk-kyu, Seo Kang-joon, Kim Hyun-joo.

tvN is available to DStv Premium, Compact Plus and Compact customers. Visit www.dstvafrica.com or follow DStv on Twitter, Facebook and Instagram to keep up with all the updates. Also, get the DStv App which is available for download on Apple and Play stores and can be used on up to 5 devices at home or on the go!

What can Bitcoin be used for?

Watch the teaser for Taiwo Egunjobi's 'All Na Vibes'

How much are writers really worth in Nollywood? [Pulse Editor's Opinion]

Rema joins Crayon in video for ‘Too Correct’

Watch the teaser for Taiwo Egunjobi's 'All Na Vibes'

How much are writers really worth in Nollywood? [Pulse Editor's…

Rema joins Crayon in video for ‘Too Correct’

Here's how the Super League died