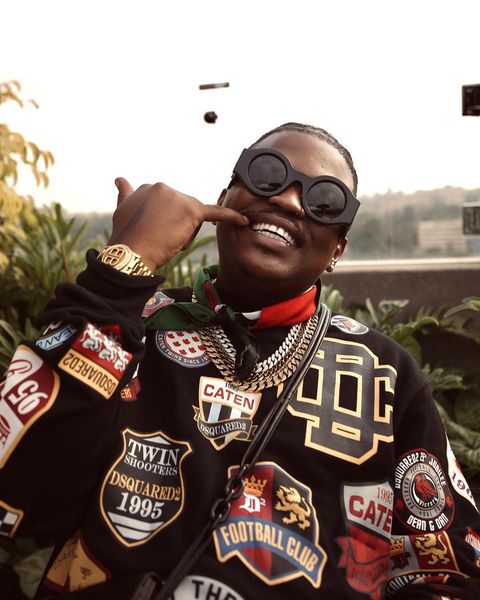 Focalistic was in Lagos, Nigeria to shoot a video for ‘Ke Star (Remix’ featuring Nigerian superstar, Davido and Virgo. According to Focalistic, the collaboration heralds the next phase of his career; pan-African identity. And this only feels reasonable after the incredible run he had in 2020, which saw ‘Sandton’’ gain moderate buzz in Nigeria.

“The internet makes it easy to measure responses to your music these days. It also makes you realize that you need to take the music to another country,” he enthused. “The week ‘Sandton’ dropped, my Instagram stories were filled with Nigerians. At that moment, I started thinking about getting outside South Africa to go see my fans. Even the dance was different.”

In 2020 alone, he released three bodies of work. His EP, Shgubu Ses Excellent has since gained some buzz across the continent. He popped into Pulse Nigeria’s building with a couple of his friends. On his second visit to Nigeria, he appreciates the ‘hustle air’ around Lagos, and likens Lagos to his hometown, Pitori.

However, he says that the difference between Pretoria and Lagos is that.

“[Lagos] is more open, lives are not as conscripted as it can be in Pretoria,” he clarifies. “Apartheid did a lot to Pitori; you grow up, go to school, play soccer, go to the tavern when you’re old enough and try to live life with little options. People’s minds have also been conscripted, it’s not the same in Lagos.”

Focalistic did go through school and was also a brilliant soccer player. As he’s told different publications, he had to choose between soccer boots and a microphone, upon ultimatum from his dad.

However, his dad died shortly after that, while Focalistic was trying to navigate his way through a Political Science degree which he later completed. For him, rap was an outlet to express pain from his grief and to cope with the pressure that the loss of his dad brought. In that moment, he also drew a lot of inspiration from the fatherless Lil Wayne.

“I don’t even know where my certificate is [laughs],” he jokes. “But when you grew up by learning the world through the internet, and seeing how people live, I was like ‘Nah, that [corporate job-seeking] life isn’t for me.’”

While in school, the music Focalistic made was limited to his circle of friends. In his second year, this introverted bookworm got a proper studio set-up to adequately make music. After studying throughout the day, he spends his nights recording.

“I was just doing the music studying to get my degree, bro. This music thing is like a spirit, it pushes and inspires you. Ask any artist, they’ll tell you that they got the same feeling,” Focalistic says.

Then he auditioned at Kantare in Johannesburg, the same platform that aided the rise of Nasty C and Emtee. That moment taught him an important lesson.

“I thought I would blow up after I performed there. At the end of the day, I got a Sky Vodka and I felt like I was good enough to quit school [laughs],” he continues. “That moment taught me that good things take time. Fortunately for me, the year I graduated was the same year my career took off.”

The switch in styles and the place of culture

These days, Focalistic has switched from rapping in English on typical Trap or Hip-Hop beats to rapping on proper African pop music, characterized by Afro-House percussion. He was always around people who make dance/house music producers with an obsession for Sghubu.

The switch happened after he had a verse that he couldn’t find a beat for. On Snow Deep’s advise, Focalistic tried the verse on a House beat but didn’t like it at first.

After a second listen, he fell in love with the record enough to try more rapped verses on House beats. That song became ‘Overload’ by Major League DJz, his frequent collaborators with whom he had a partnership. The idea was to put rap and dance music together.

“Where I’m from, just rapping and rapping doesn’t make sense. You need to bring a little more than that and that’s why I do it, you know,” he says. “The people where I come from, I need to open up their minds so they can enjoy my music, So, I took it back to my language and started talking about our reality and experiences. That’s how my sound became my sound.”

This isn’t dissimilar to the conundrum of Hip-Hop across Africa and the reality that hits many rappers across the continent. On one hand, you want to make Hip-Hop like all your American heroes. But on the other hand, you need to make music that your people can like and enjoy.

As Ruggedman revealed on his classic 2006 record, ‘Ruggedy Baba,’ a conversation with the legendary Paul Play made him realize that Rap music needed to be sprinkled with Nigerian/African elements before it can be accepted here. Over 12 years later, a 22-year-old South African rapper discovered the same thing in Pitori.

In English that means, ‘This is not a trap, it’s for the ghetto.’

“The Trap/Hip-Hop guys used to be angry with “Ase Trap Ke Pina Tsa Ko Kasi” at first [laughs], but when they realized what it was, they gravitated towards the movement,” Focalistic reminisces. “Trap was the glamorous thing, but I was like I don’t want to do that, I want to make music that my mom, my whole hood can relate to and be proud of. I wasn’t talking down on Trap, I just wanted to make people understand the origin and purpose of my music.”

“I make Trap, but I never lie about having a gun or a gang, I just wanted to talk about the realities of my hood, you know. People used to think I was shading Emtee [laughs], but I wasn’t,” he continues. “Maybe the competitive part of me made me want to carve a niche for myself, but we don’t have a Trap in South Africa.”

“Don’t get me wrong, there is a version of the trap everywhere, but as I say on ‘Ase Trap Ke Pina Tsa Ko Kasi,’ our trap is called the ‘Kasi.’ There might be shared similarities with the American trap because they’re both elements of the Ghetto, but the ‘Kasi’ is different,” he clarifies. “I just wanted to sync the music with our identity; my identity so that our people can relate.”

“But essentially, every Ghetto is the same. There’s always the hustler, the blesser, the fresh guy, the girl whom everyone knows… There are just peculiarities.” He concludes. “For example, we have the Gusheshe [BMW cars] that are the most coveted. A symbol of our trap is to steal it and then come drift with it in the hood. That’s how it became part of culture.”

A few years ago, Trap was the biggest thing in South Africa and everybody aspired to it. Now, but like everybody realizes, danceable rhythms will also outlive foreign genres in all African countries.

Like in Nigeria, indigenous rappers were initially perceived with contempt by the Hip-Hop community in South Africa.

“People enjoy the concept of superiority in Hip-Hop when the guys being looked down upon actually represent the authenticity of Hip-Hop more [laughs],” Focalistic enthused. “It’s funny because the guys who speak their dialect actually have more understandable bars, you know what I mean. I don’t pay no mind to that, I’m the hardest rapper in South Africa because the masses relate.”

“I didn’t set out to be that, I set out to be a dope musician, but I just so happens that I’m also the hardest rapper out of South Africa,” he continued. “It’s just what it is. We’ve also never denied that Hip-Hop denies people like me. Boom Bap isn’t the only way to make Rap music in 2021.”

Part of this is why Focalistic released Quarantine Tarantino in 2020. The 10-track project was a showcase of his range as he performed on real Rap beats. He then released Blecke to consolidate before he released Sghubu Ses Excellent to showcase the global potential of his music. He also had an EP inside Kabza De Small’s album.

“I’m always recording, I just took a break recently because of traveling and touring,” he says.

Afrobeats to the world

To Focalistic, the movement isn’t just about music. He feels like music, which is central to the movement promotes all the previously under-celebrated aspects of African culture.

“A lot of this has to do with how we’ve honestly accepted ourselves as Africans. Now, America is looking to us for inspiration. In South Africa, there was a time when we’d go, ‘Oh sh*t, that’s a Nigerian.’ Now, everybody wants to be Nigerian because of the music,” he says. “Governments need to start looking into the power and influence of pop culture and music.”

Over the past few months, Amapiano has become the leading Afro-pop genre of music in Nigeria. It also comes in the thick of rising anti-Nigerian sentiment in Cameroon, where Nigerian artists are being accused of suffocating homegrown talent. In the past, Ghana has accused Nigeria of stealing a pop sound without giving credit.

That dates back to the Highlife-Afrobeat era. Xenophobia also took centre stage in South Africa recently, but Focalistic doesn’t think these issues are necessary.

“Africa is one. I have worked with Nigerians and they have inspired new sounds in South Africa. It’s only normal that Africa will inspire Africa and I don’t see why we should have problems amongst ourselves over this,” Focalistic reinforces. “We are like brothers and sisters; MTVBase and Channel O married us. Fundamentally, our sounds have a similar sonic pattern – it shows how linked we are. We can’t just unmarry these things.”

“At the end of the day, there’s only so much you can do in your country. Blackness is interlinked, that’s why our brothers in the diaspora are like evangelists for our music,” Focalistic continues. “Blackness creates a link by itself. We are stronger together than we are apart, I hope we all realize that and stop fighting over who owns what and how they invented it. You saw what Burna Boy did to ‘Jerusalema,’ bro…”

Focalistic would still like to win a Grammy, but it’s not a priority anymore. Instead, he would like to enjoy the coolness of African streets and go triple-platinum in his home. He would also like to see an African award, instead of a Grammy.

“I don’t think someone on the Grammy board has sufficient knowledge to decide what’s good for us or what’s hot here,” he says.

Despite his global appetite, Focalistic isn’t going to suddenly rethink his streaming strategy. He feels like the only way to success is authenticity. Sonically, he just wants to keep creating without fears of limitation or a plateau.

Here is everything you need to know about 'Ponzi'