Despite the opprobrium, Gernot Rohr showed some tactical flexibility against CAR 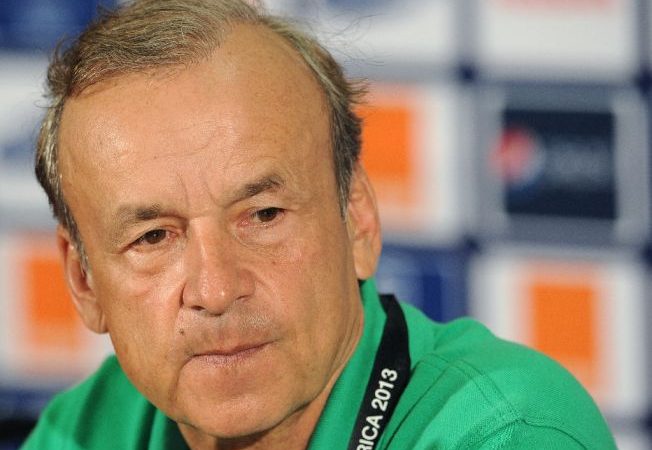 The German tactician was relieved following Sunday’s 2-0 win in which certain elements of Nigeria’s approach impressed.

Relief was the abiding emotion after Nigeria’s 2-0 win over The Central African Republic on Sunday, and you sort of understand why.

Following Thursday’s events at the Teslim Balogun Stadium, the Super Eagles needed to win the reverse fixture against the same opponents as calls grew for Gernot Rohr to be jettisoned after five years in charge.

Not only had performances slipped in the last two to three years, but there’s been a feeling the German has taken this group of players as far as he can. Understandably, the criticism of the coach increased following the unexpected 1-0 loss in Lagos; after all, he couldn’t deliver the one thing that’d kept fans from going entirely Chicken Little: results.

Victory on Sunday was imperative, owing to the possibility of the Wild Beasts or the winner of the Cape Verde-Liberia encounter moving level or edging ahead of the West African giants.

As it turned out, the Blue Sharks’ win over Liberia would have taken them ahead of the three-time African giants if the latter lost in Douala.

Rohr was pleased with the success, particularly as it came following a change of system from a 4-4-2 to a 3-4-2-1.

“It was a good reaction from my team, we lost the other day – very unlucky at the very last minute,” the German tactician told NFF media.

“Everybody wanted to take revenge and they did it very well although we could not score a third or fourth goal.

“We changed the system and played three [defenders] at the back which helped us as well as the leadership of [Ahmed] Musa to win this game.

“It is not easy to play the Central African Republic. They committed a lot of fouls but fortunately, we didn’t have any big injuries.

“Now we can prepare for the next game in November and hope that everything would be fine at the end of the day.”

The switch to a back three was striking, especially as the former Bordeaux tactician had always appeared wedded to utilizing systems with four at the back.

Despite the non-stop criticism of the Nigeria boss, both games against the Wild Beasts suggest he’s not as tactically obdurate as many claim.

In the 1-0 defeat in Lagos, the changing shape of the Super Eagles, especially in the opening half, was fascinating, despite the humdrum nature of the game and the hosts’ execution or lack thereof.

At times, Frank Onyeka dropped between the center-backs in the home side’s build-up

phase, thus prompting a switch to a back three, with Ola Aina and Moses Simon then taking up interesting positions on the pitch.

Occasionally, the Torino wide defender stayed narrow — in a defensive midfield spot rather than out wide — while Simon hugged the line. In other instances, this was reversed.

With most of the team’s attacks funneled down the right flank in that half, the rotations of positions and inclination to cause overloads on that side caught the eye in an otherwise tepid showing by the team.

After half-time, the narrower positions taken by Nigeria’s nominal wide attackers — Chidera Ejuke and the Nantes star — was a slight shift to their utilization under the German boss. It was from an inside left position that Ejuke found half a yard and played in Victor Osimhen who inadvertently hit the post with a cross. The resulting action saw Simon set up Taiwo Awoniyi for the Eagles’ best chance of the game.

Of course, the wingers weren’t manacled by this approach and still drifted out wide to act as traditional wingers from time to time but they seemed more intent to stay in the channels.

In the 2-0 win over the same opponents in Douala, the altered shape meant Kelechi Iheanacho and Ahmed Musa flanked Osimhen with the former pair often drifting to find space and get the ball in deeper areas.

The wing-backs — Simon and Jamilu Collins — provided width in the main, while teammates took turns to create overloads on the flanks.

Rohr is often seen as inflexible — a self-inflicted tag in fairness — but he and his team showed they are willing to adapt and find solutions if need be and Nigerians will hope the flexibility shown against CAR births another facet to this talented Nigeria team.

Seye Omidiora is a passionate football writer and pundit whose deep appreciation for the beautiful game exceeds the usual. He is currently a columnist for Goal Africa and has previously written for Vital Football UK, IBCity Info and Opera News.