Two days ago, a video of the singer on Comedy Central Roast, South Africa became the toast of Twitter NG with Davido seen roasting Pearl Thusi and rapper, AKA.

Some weeks before that, he also appeared on Ebro In The Morning hosted by Ebro Darden. 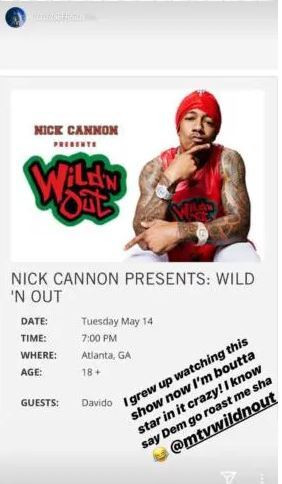 Now, he is set to debut on sketch comedy show, Wild n’ Out hosted by actor, comedian and rapper, Nick Cannon on May 14, 2019. The singer jumped on his Instagram story earlier today to share the news.

While joyfully sharing the story, the singer typed, “I grew up watching this show now i’m boutta star in it, crazy! I know dem go roast me sha.”

The show will happen in Davido’s backyard of Atlanta, Georgia.

These appearances feel like part of an aggressive roll-out for Davido’s upcoming sophomore album.

No plans to relocate NGMC to Abuja – NNPC