Davido has body-shamed a female lawyer on Instagram after she threw shades at him over his choice of political candidate.

The Instagram user, who has since been identified as T.Lolo, accused Davido of selling his soul by promoting the Peoples Democratic Party, PDP and its presidential candidate, Atiku Abubakar.

“Wait so David wants to throw his toys out the pram and sub wiz kid because he didn’t want to sell his vote or sell his soul convincing the population to vote knowing FULL WELL that the candidate is thrash.

ALSO READ: 5 that have been body shamed

“All of us here using our voices to remind people that they have a choice and this one wants to regress. Not everyone should get involved if your influence is going to be used to keep Nigeria where it is,” Lolo wrote on Saturday, February 16, 2019. 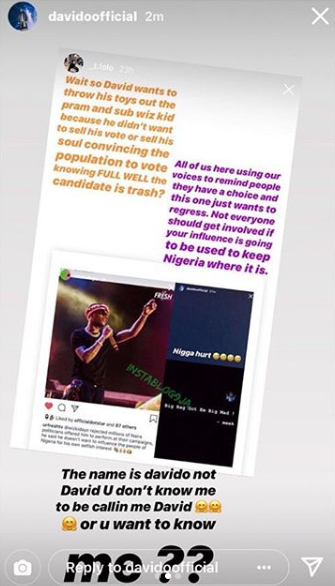 Unfortunately, the ‘Fall’ singer posted an angry response to protest the condemnation.

In his response, Davido body-shamed T.Lolo saying she has ‘no ass and no tits’.

“The name is Davido not David, You dont know or you want to know me?? Make I start? You got a list and you know it! ooops. 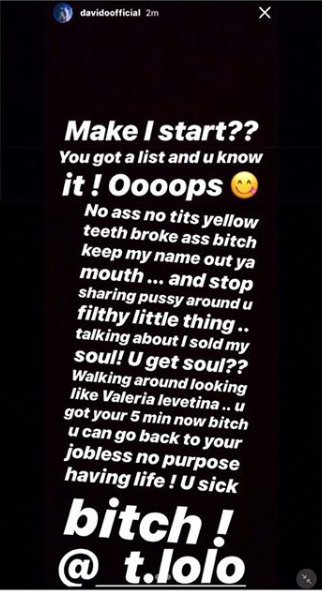 “No ass, no tits yellow teeth broke ass bitch keep my name out ya mouth, and stop sharing p*ssy around yoy filthy little thing. talking about I sold my soul? Walking around looking like Valeria Levetina.

“You got your 5 mintutes now bitch you can go back to your jobless no purpose having life! You sick bitch,” Davido reportedly replies. 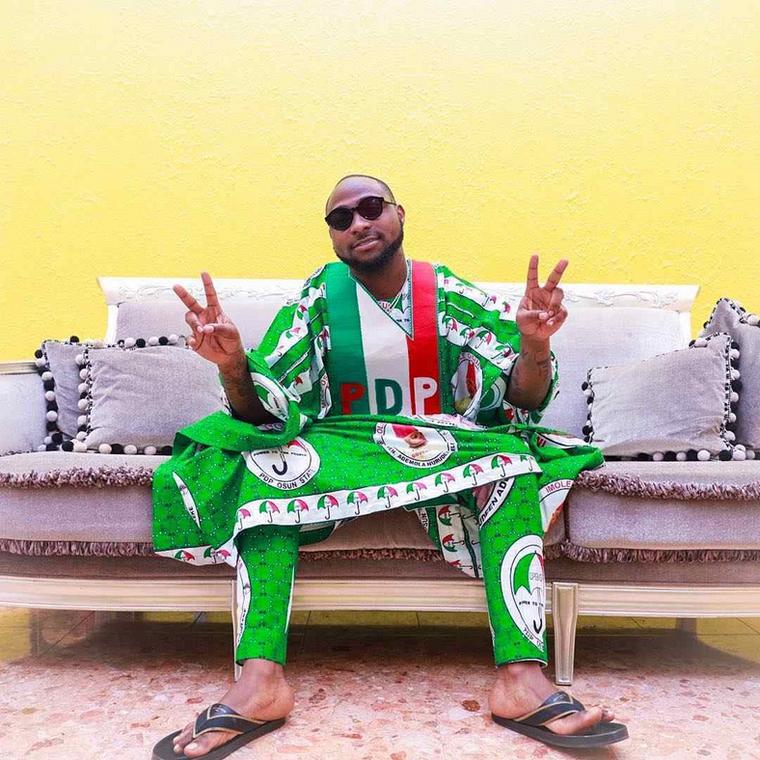 Davido has been in the news for his seeming support for the opposition party, PDP, which has his uncle, Senator Adeleke as a member.

T.Lolo defends herself after Davido’s attack

In a video posted to reply Davido’s harsh counter, T.Lolo brings attention to the impact of the singer’s reaction on people around him and his social media followers.

“No, ass no tits yellow teeth broke ass bitch… From where? My tits are good. Do you know what I mean?

“There is two little girls that he has brought into this world. All of these people are aiming for some kind of influence.

“And I think it is a bad example. What does my body have to do with anything?,” she asks.

The Instagram user also noted that her video response was an advocacy to address the common issue her gender is faced against living in the Nigerian society.

“I am not gonna lose sleep over David. I did wanna highlight that we are still here.

“We are still in this whole thing where a man is gonna see you and if he does not like what you are bringing to the table, he is gonna analyse how you look.”

Since hitting stardom, Uriel Oputa has been faced with so many backlashes by followers on social media. Despite that, the reality star has refused to be intimidated by these nosy guys.

Back in January 2018, Uriel had taken to her Instagram page where she posted a video of herself looking beautiful but she had a different message for those who are always quick to body shame her.

” I am proud of my body, I am a proud African woman, I am proud of my big saggy boobs, these boobs will feed my children,” Uriel revealed. Uriel who was visibly emotional went on to talk about how she has over the years tried to look good in the eyes of the public

“It’s so difficult to be in the public eye, I just wish people can stop saying horrible things. I cant help with the way I look, I really cant. I have tried many things, I have tried to put sellotape on my boobs and on my brazier. Forgive me but I don’t rely on my body to get by, I rely on my brains, half of you cannot walk in my shoes, do half of the things that I have I done. Keep inspiring people, keep being positive,” she concluded

When most share their photos online, they usually attract comments from followers. Most times these comments are cute and at times we get to see the backlash from some nosy followers. So when Uriel shared a photo on her Instagram page back in January 2018 and started getting backlashes from followers, she too came prepared for the party as she gave them a taste of their own poison.

The thing about Uriel’s posts on social media is that she kind of gets tipped off even before the body-shamers come for her and this was seen again in another photo she shared a few days ago on her Instagram page. She posted the photo and already had a message for those who were going to be calling her out.

“Pls pls, I would like to beg you let my saggy boobs feel sexy pls… It’s a shoot after I will pack them. Pls just let me have this picture I’m shaking as I’m typing this. Pls pls, Amazing shoot with a Ghanaian Fashion brand @eunice_oheneba_asiedu Make up @caroline_odgPlus size models rock,” she wrote.

One celebrity who has always come to Uriel’s rescue like a knight in shining armour is the veteran rapper, Ruggedman. For every time Uriel has been body shamed, Ruggedman has always confessed his love Uriel’s body, especially, her ‘Saggy boobs.’

Gbenro Ajibade calls out wife, Osas Ighodaro on Instagram over neglect of their child

Davido apologizes to all women after body shaming a lawyer