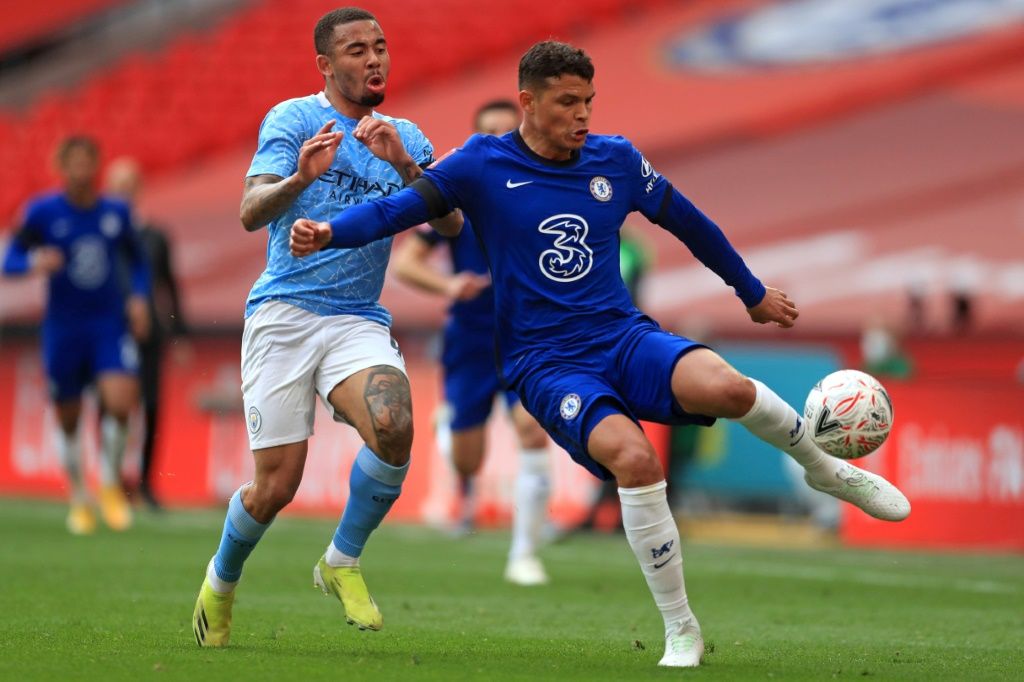 Karim Benzema (L) has been Real Madrid’s talisman this season

A second all-English Champions League final in three seasons is in sight with Manchester City and Chelsea in strong positions heading into the second legs of their last-four ties against Paris Saint-Germain and Real Madrid this week.

In 2019, as Liverpool beat Tottenham Hotspur in Madrid to win the Champions League, Chelsea had just returned from defeating Arsenal in Baku in the Europa League final.

The talk then was of a new era of English dominance in Europe being ushered in. Two years on, and despite the twin hits of Brexit and the pandemic, an identical scenario is a distinct possibility.

Pep Guardiola’s City host PSG after winning 2-1 in France, leaving them on the brink of a first ever Champions League final.

The appointment of Thomas Tuchel has transformed Chelsea and their 1-1 draw in Madrid makes them favourites to reach a first final since winning the trophy in 2012.

Arsenal could be their opponents in Gdansk later this month, if they can overturn a 2-1 deficit against Villarreal.

It is hard to draw definitive conclusions about the meaning of results in the knockout stages in Europe. Ties are often decided by small details.

But there is a pattern emerging, and the indication is some results in last year’s ‘Final 8’ formats — with one-off quarter-finals and semi-finals played on neutral grounds — may end up looking slightly freakish.

Nine months after losing to Lyon in a quarter-final in Lisbon, City look ready to reach that elusive final following over a decade of huge investment from their Emirati owners.

Chelsea’s own run is not just about Tuchel but also partly their decision to spend close to 250 million euros ($300 million) on new signings last summer.

Clubs across Europe are facing serious financial difficulties caused by the impact of the pandemic, just as Madrid president Florentino Perez argued to justify the failed Super League project of which he was the chief backer.

Real and PSG are themselves two of the world’s wealthiest clubs — indeed the Spanish giants were a close second to Barcelona in analysts Deloitte’s Football Money League for the clubs with the biggest revenues last season.

However, the Premier League’s huge domestic and international broadcast contracts put its clubs in an enviable position.

“This helps explain why non-English clubs have been more enthusiastic about the Super League.”

England’s so-called “Big Six” did initially sign up for the Super League, but they had less need for it.

They will continue to feature heavily in the latter stages in Europe as they attract the bulk of the best players. The pendulum is swinging across the English Channel.

Only two of the last 12 Champions Leagues have been won by English sides, with Madrid, Barcelona and Bayern Munich the main forces in that time.

Indeed, with 11, Spain’s giants have won more than twice as many Champions League titles since 1998 as English clubs, with five, combined.

City appear to have the most complete team left, not to mention the finest coach of his generation.

“If we play like who we are, maybe we have the chance to reach the final,” Guardiola said after the win in Paris.

Chelsea have a fine coach and some brilliant young talents, and PSG the stardust of Neymar, Kylian Mbappe and Angel Di Maria.

Yet Real retain the core of the team that won four Champions Leagues between 2014 and 2018, and in Zinedine Zidane the coach who delivered three of those.

From Raphael Varane and Luka Modric to Toni Kroos and Karim Benzema, their experience means the prospect of them beating Chelsea and winning the trophy in Istanbul on May 29 must not be dismissed.

“We’re alive and we’re going to the second leg with the idea of winning,” said Zidane.