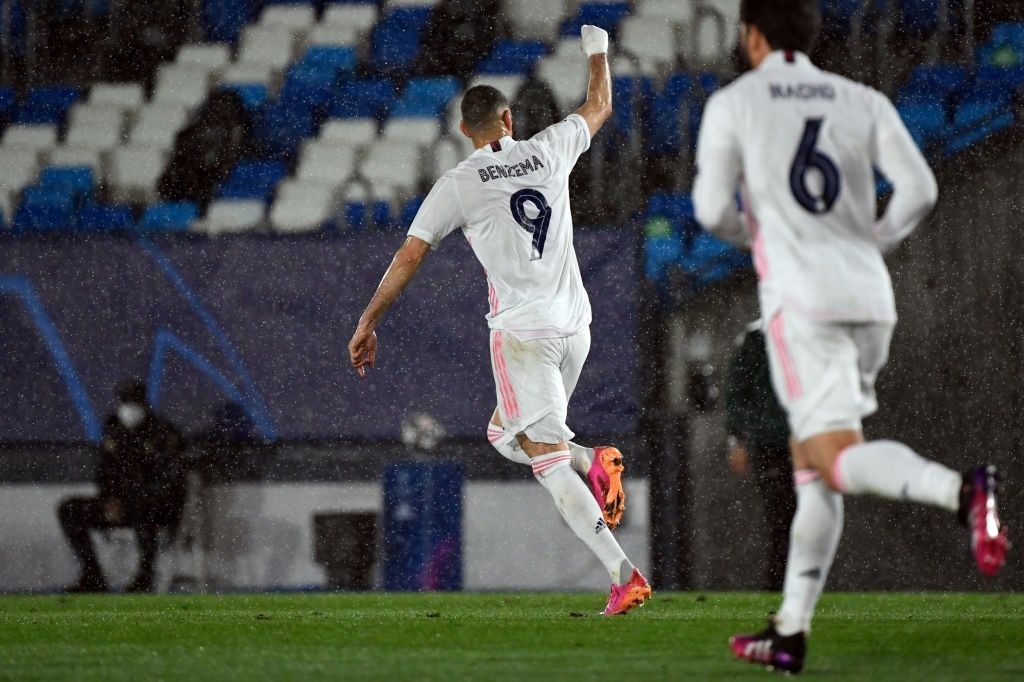 Karim Benzema came to Real Madrid’s rescue again on Tuesday, his acrobatic volley earning them a 1-1 draw against an impressive Chelsea side in the first leg of the Champions League semi-final.

Christian Pulisic grabbed Chelsea a deserved away goal in a soaking wet contest at Valdebebas but they might regret not pulling away, with the struggling Timo Werner again missing a golden chance.

It means Madrid will be satisfied too, after recovering from a chastening opening half an hour before Benzema’s brilliance left the tie in the balance.

Eden Hazard was given 24 minutes off the bench against his former club but despite some twinkling touches, he was unable to add a late twist. “It’s always good to play against friends,” Hazard told BT Sport afterwards.

By the time the Belgian entered the contest, it was drifting, the early adrenaline lost, with both teams seemingly content to defer to the return leg at Stamford Bridge next Wednesday.

Benzema’s goal was his 71st in the Champions League, making him the joint-fourth top scorer in the competition’s history with Raul, behind only Cristiano Ronaldo, Lionel Messi and Robert Lewandowski.

When Real Madrid were suffering, and in the absence of the injured Sergio Ramos, Benzema was the one dragging his team back into this match, at times through sheer force of will.

With Werner clearly short of confidence, the Frenchman’s precision at the other end could yet prove the difference.

“The result is fair,” said Zinedine Zidane. “Our first half wasn’t the best, their pressure caused us difficulties but we adapted and in the second half we were better.”

These two teams were both among the Super League’s ‘Dirty Dozen’, with Madrid president Florentino Perez, the face and voice of the breakaway project, watching on at the Alfredo di Stefano Stadium.

Despite stirring scenes of protests outside Premier League stadiums last weekend, Real Madrid’s – admittedly remote – training ground was untouched by any sign of discontent with the club.

And there was no Real Madrid revolt against UEFA either, with the Champions League anthem ringing out as normal and the stadium announcer loyally declaring: “The UEFA Champions League brings together the best teams in Europe.”

Chelsea were electric in the first half an hour, their passing slicker and their movement quicker than Madrid, who were unable to keep up.

Werner should have scored when Mason Mount’s deflected, looping shot was headed across goal by Pulisic but he missed from six yards, his volley blocked by the right leg of Thibaut Courtois.

But Chelsea’s dominance was such that another chance never felt far away, in the 14th minute Pulisic taking advantage.

Antonio Rudiger was given time to float a delightful ball over the top for the darting American, whose first touch took him left but he recovered his poise, nipping past Courtois and firing between Marcelo and Raphael Varane on the line.

Chelsea were rampant but as the rain began to pour, Madrid found a way back. Benzema led the resistance, one shot from distance shaving the post before another from close drew Madrid level.

A short corner worked its way to Marcelo on the edge of the area and his cross was headed back in via Casemiro and Eder Militao. Benzema, with his back to goal and surrounded by blue shirts, tamed the ball with his forehead before throwing his body into the air and volleying in before his markers could react.

Marcelo and Jorginho were both guilty of sloppy passes early in the second half but neither Werner nor Benzema could capitalise.

And for 20 minutes the game drifted, both sides nervous of opening up. Four substitutes came on just after the hour, Hazard and Kai Havertz among them. Hazard was making his third appearance in three months.

But Benzema’s shot was blocked, Hakim Ziyech’s free-kick curled into the hands of Courtois and a late Madrid cross flashed past the far post. A draw was a fair result.

Army silent on alleged killing of two personnel in Ebonyi