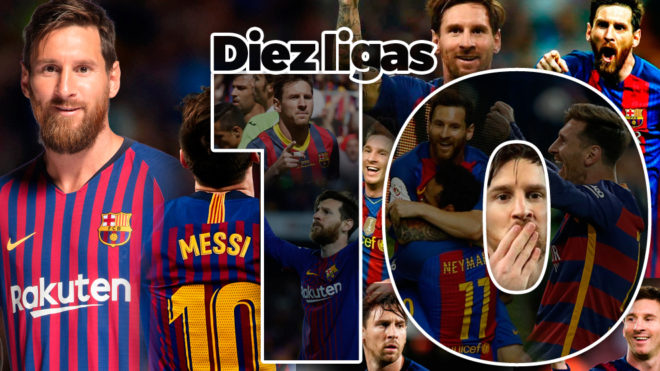 Barcelona: The 10 LaLiga Santander titles of Barcelona’s no.10

Barcelona Has 34 trophies at the club

Barcelona will miss Lionel Messi when he hangs up his boots. The Argentine continues to deliver success to the Camp Nou and by delivering the club their 26th, he added his tenth LaLiga Santander win.

The no.10 now leads Andres Iniesta and Xavi‘s tally of nine and eight respectively, and with neither remaining in Spain, that distance will only grow.

Messi has been dominant since joining the first team, now 15 seasons ago. He’s been a leader with his performances, and this season he took the captaincy to take his leadership to a new level.

The season isn’t over just yet, either, so he can still improve on his already-impressive numbers. En route to the title, he’s racked up 34 goals and a further 13 assists, making him the most decisive player in the division.

For a long time, Messi‘s only rival has been history, and his own records. He tops most of the individual record charts around, and seems to break a new one every week. But there are still some left for him to aim at, one of those being the most LaLiga Santanders won by an individual – currently, Paco Gento has the most with 12.

Within Barcelona, nobody comes close. Messi has delivered 34 trophies to Barcelona, two more than Iniesta‘s 32, and it’s unlikely that figure will be topped by anyone else anytime soon.

If anything, he himself will add to it as Barcelona continue to fight in the Champions League and Copa del Rey this season.

All of this suggests he’s the frontrunner to lift the Ballon d’Or this year, after three seasons of seeing the award go to Madrid. The Messiah is back on top.

Who Get Ear: Here are 10 Songs You Need To Play This Week