The album was promoted by three singles, ‘I Dun Care, ‘ ‘Mind Your Bizness’ featuring Falz and ‘Jericho’ featuring 2019 Gidi Fest headliner, Patoranking. The album had 13 tracks for a cumulative run time of 38 minutes. The genres across the 13 songs are sentimental Ballad, afropop, folk, afro-fusion, afro-soul, afro&B and EDM/Moombahton.

Fresh from her marriage to fellow artist, Adekunle Gold, the album title is celebratory and is dedicated to her father, Engr. Charles Oladele Ogunleye who passed in 2014. ‘Charlie’ is a popular short form for ‘Charles,’ and a lot of people named Charlie in Nigeria get jokingly referred to as ‘Charlie Champagne.’

Here are some thoughts on the album;

As noted earlier, the genres across the 13 songs are sentimental Ballad, afropop, afro-fusion, afro-soul, folk, afro&B and EDM/Moombahton.

While the album boxes in itself is different vibes across different songs, one just struggles to call the production on Omo Charlie Champagne anything other than ‘mellow,’ which play canvass for sharp themes of introspect, positivity and brightness. 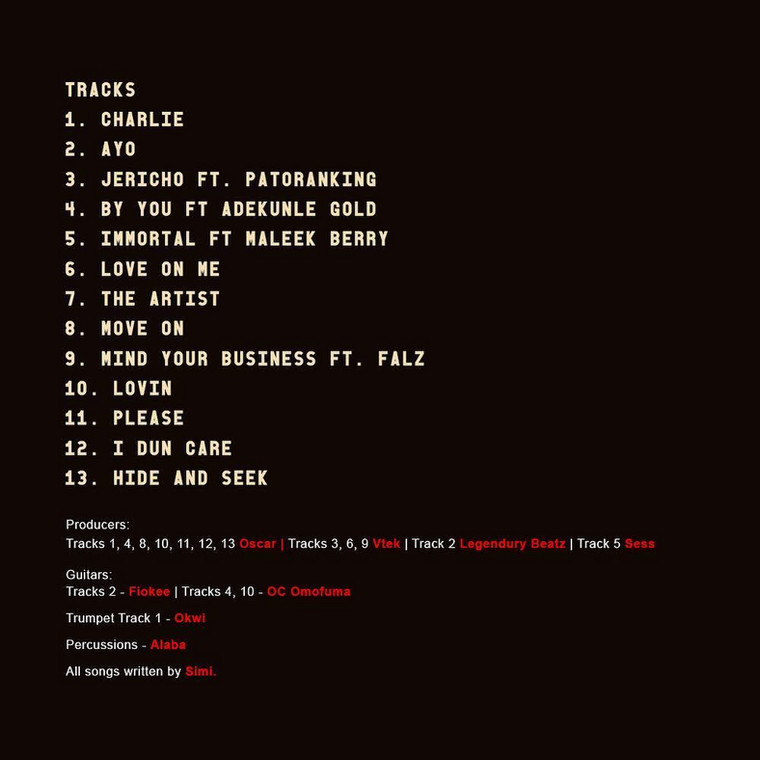 The sound is definitely similar to that on Simisola, but it’s more about it being Simi’s style that any lack of evolution than artistic stagnation. Thus, it’s not time to call the wolves just yet; the appropriate time to have any such conversation is not even her next album.

There are some unavoidable similarities though; except the very sentimental shade of ‘Mr. and Mrs. Gold-Ogunleye’ singing about eternal love on ‘By You,’ it could very well have been ‘Smile For Me’ or ‘Complete Me’ from Simisola. ‘Mind Your Bizness’ is like a flipped ‘Joromi.’

The afro soul with the folk percussion on ‘Ayo’ could very well have been ‘O Wa N’be.’ In Simi’s defence, if she had transcended our expectation for something different, it might have been too risky.

That said, Omo Charlie Champagne features some sonic experimentation within that familiar classification. Songs like ‘Jericho,’ offer Wizboyy and 2010 Duncan Mighty vibes while carrying the sigil of ‘house Simi.’ The Patoranking feature was also definitely inspired.

The masterstroke though was how she worked another divergent sound without straying from what we’ve come to love about her music. Simi on the EDM/Moombahton ‘Immortal,’ is like Kendrick Lamar doing trap music on DAMN. without making it the major primary object of criticism, but instead a major point for endorsement on stylistic diversity.

In the end, arguments can be found for endorsement or criticism of Omo Charlie Champagne on what it evokes, but one thing we cannot deny is Simi understood the need to evolve sonically, and she did on certain sides of this project if you are vigilant enough.

Simi is renowned for detail, imagination and execution when it comes to songwriting, thus scatterbrained approaches will probably never be her way except an American label feels she needs to become a Rihanna-esque pop star.

Omo Charlie Champagne is quite unsurprisingly excellent on the songwriting front as it tackles topics of loss on ‘Charlie,’ happiness and prayers on owanbe theme song, ‘Ayo,’ Love on ‘By You,’ ‘Love Is Love,’ the vibe of ‘Hide and Seek,’ and the afrobeats of on ‘Love,’ careless love on ‘I Dun Care,’ loyalty on ‘Jericho’ and sex on ‘Immortal.’

She also tackles anti-gossip on ‘Mind Your Bizness,’ fears on the ballad, ‘Please,’ and break up of ‘Move On.’

The consistency was almost admirable. Finicky listeners might question the lack of diversity beyond what could all be traced back to love, but you cannot ask Lionel Richie for more than love.

That said, ‘Mind Your Bizness’ feels like a song conceived to fit a comical video, and serve as a theme song to everyday life, but it also feels like a filler and the only questionable and forgettable part of Omo Charlie Champagne. Without it, the album would have still been brilliant.

At first glance, it feels like an album of mostly well-conceived songs, carefully arranged based on the genre of music or style of music each song is to permit easy track-by-track transcendence and segues.

At second glance, the introduction of break-up song, ‘Move On,’ after ‘Love On Me,’ and followed by ‘Mind Your Busines’ makes it seem like a short story of love gone sour, then only to be ignited on songs like ‘I Dun Care,’ but the details on those songs might betray that notion.

The features and how they all came together make for an impressive album, but inevitably, I expect finicky listeners to question the lack of diverse topics.

This is quite simply an excellent album. Simi should be proud of herself and the way she’s subtly growing. As for similarities between some songs on Omo Charlie Champagne and Simisola, the latter album was too successful to not cause a hangover and some sort of creative pressure, which might have led to a penchant to channel some energy off it.

Nonetheless, the beauty of songs like ‘Jericho,’ ‘Immortal,’ ‘Move On,’ and ‘Hide and Seek’ showcase Simi as an evolving artist that understands the need to evolve without necessarily betraying her brand – that is impressive.

Could Omo Charlie Champagne be as big a hit as Simisola? Time will tell, but it does retain some of the elements that propelled Simisola to otherworldly levels.

Oil prices shoot to 2019 highs on US Iran sanctions move