‘4th Republic’ is a political thriller that sticks to facts

‘4th Republic’ is a long, and intriguing trip through tribunal process with an expose on the messy web of deceit, betrayal, and discord behind the scenes. The political thriller also reveals a harrowing round of blockage faced by investigators and masterminded by more powerful figures.

Writers, Emil B. Garuba and Zainab Omaki exploit a tight screenplay that is relatable, void of distraction, direct, and succinctly clear. ‘4th Republic’ is sharp-witted and fiery like many political thrillers that come out distinct despite being weaved in a web of melodrama. The story is a perfectly concise 120-minute summary of Nigeria’s political, electoral and judicial efforts in sustaining the republic’s democracy.

Kate Henshaw (as Mabel King) is composed, determined, and an incorruptible female politician eager to make a change in the Confluence state. And in Enyinna Nwigwe (as Ike), a collected, young and brilliant chap, she found a trustworthy and incorruptible aide. Supporting roles from Bimbo Manuel, Linda Ejiofor, Yakubu Mohammed, Sani Muazu, Six Foot Plus, and Medupin Olalekan make certain that every scene is stuffed with stellar performances.

The movie plot is centered on the canceled votes from Ikomi LG, the largest local government area in Confluence state after electoral officers were massacred and election materials were burned. Mabel King is called to the fore when her campaign director, Sikiru was murdered alongside INEC officials and Youth Corp members working with the officials. And the plot to unravel the culprits behind the massacre as well as contest the result announced by INEC sees Mabel seeking redress at an election tribunal. 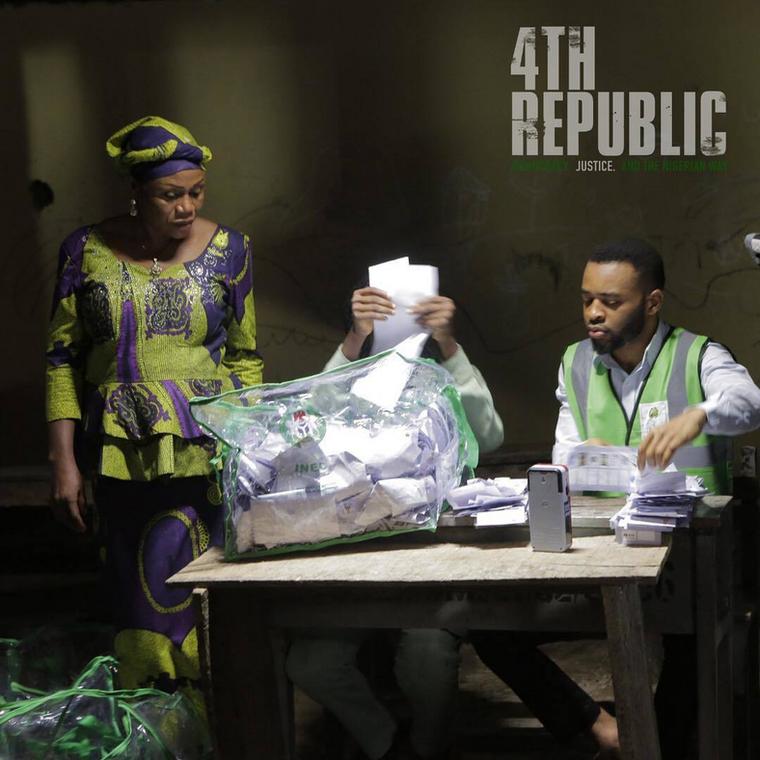 A scene from the political thriller, ‘4th Republic’ [Instagram/4threpublicmovie]

Bimbo Manuel (as St. James) is a cold and mean villain in this political thriller. In his usual character, Manuel gives a no-holds-barred performance as the loyal and ruthless aide to serving Sani Muazu (as Governor Sani). As the governor’s man Friday, Manuel pulls all the strings and ensures his bosses perceived enemies are taken care of – be it bad or good. Ishaya Bako struck gold casting Bimbo Manuel for the role of St James.

‘4th Republic’ further turns complex election tribunal conversations between legal practitioners into a couple of interesting and enjoyable scenes. Here, rap act, Six Foot Plus got his chance to interpret the role of a defense lawyer with the backing of the state and ability to make a case in the glaring eyes of truth. Maybe not all election tribunals have become interesting watch for your average audience, but Emil B. Garuba and Zainab Omaki are two tremendous interpreters. Both writers neither left us in the dust or spoke too high above our heads.

And Bako encapsulates a typical 18 months election tribunal is just 2 hours. It’s crystal clear that Bako’s directorial brilliance has rubbed off on the final outcome of the movie, ‘4th Republic’. Bako’s writing ability complements his directorial talent while heightening the nostalgic moments in the film and depriving it of derivative or over saturation. The flow of the film feels natural and original.